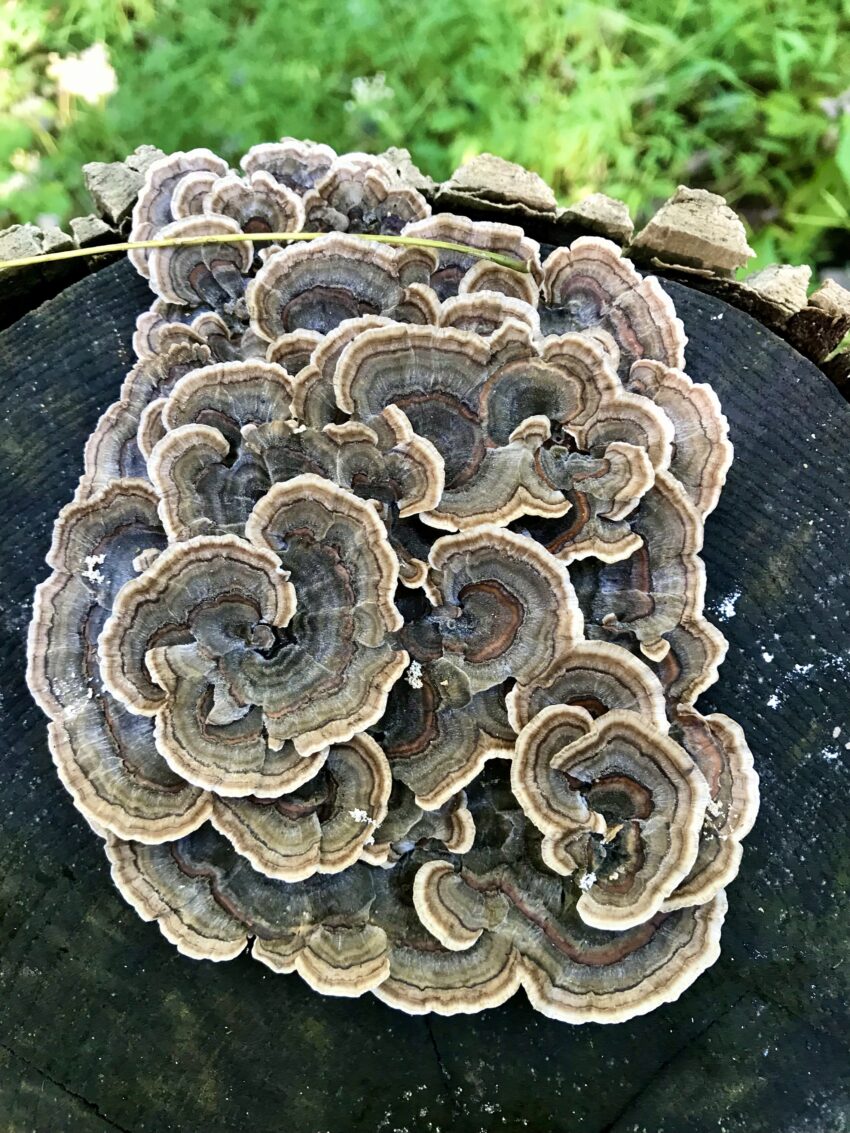 I’m teaching environmental philosophy for the first time this semester. It’s part of our school’s new environmental literacy degree requirement. Just like they need general education credits, they need credits relating somehow to the environment; courses like mine are “E” courses.

It’s not an environmental ethics course per se, although ethics is part of it. I’ve organized the course around whether we can change how we value the environment by changing our view of it, that is, by increasing our understanding through science and different conceptual schemes. Part of the value question here is moral value, but another part is aesthetic value. I’ve read a lot of philosophy on the former, and (before this semester) none about the latter.

Western thought is a latecomer to the appreciation of natural beauty. As Allen Carlson (in “Appreciation and the natural environment”) and J. Baird Callicott (in “The Land Aesthetic,” a chapter from his companion volume for A Sand County Almanac) point out, where philosophers have had something to say about aesthetics, they have focused largely on the aesthetics of art. Callicott even says that “aesthetics” and “art criticism” have been practically synonymous in philosophy. The natural world did eventually enter the picture, but only by, well, entering the picture. Nobody cared much for the land until painters started making landscapes, and by the time people got a taste for landscapes, their taste for the land itself was derivative from their taste for art. Through the landscape lens, wild places are beautiful chiefly for the contribution they might make as an art object. We could update Carlson and Callicott here by saying that, historically, the Western eye has understood the aesthetics of the non-human environment in terms of Instagrammability. In this view, we can only appreciate a walk in the woods for how it will play as a Facebook story.

Needless to say, Carlson and Callicott recommend a very different view. I like Carlson’s unapologetic line that even taking something from outside and displaying it on your mantel (or bookshelf, in our case) doesn’t amount to appreciation of nature. The snake skins and feathers on display in our home amount to found art, about as natural as Duchamp’s Fountain. What counts, then? What’s missing?

One hint comes from the landscape model: the reduction of land to vistas. This is a problem in multiple ways. First, the idea that we can carve out special places for a certain sort of experience leads us to devalue and ignore our more mundane backyards. It gives credence to the thought, “Hey — I-95 isn’t exactly Yellowstone, so why not toss my garbage out the window?” So a clear moral hazard crops up here. But another problem stems from the privileging of the visual. There are some places in the Hudson Valley marked out as scenic views, with signs pointing to places you can pull over and look at. But that’s all they are: places to stand and look from, like the floor space in an art gallery. A view can show you the trees and waters, but you end up so removed that you can’t hear buzzing cicadas or correct your balance on a surprise patch of mud. None of that fits into the aesthetic ideal of the “picturesque” required by a vista.

The difference between art, landscapes, and environments comes down to embeddedness. To acquire a taste for wilderness, you have to give up your identity as a spectator. Carlson puts this by saying we have to move beyond the subject-object model of experience when it comes to the environment, and Callicott seems to agree:

A person is in the landscape, i.e., in the natural environment, as the mobile center of a three-dimensional, multi-sensuous experiential continuum. The appreciation of an environment’s natural beauty can involve the ears (the sounds of rain, insects, birds, or silence itself), the surface of the skin (the warmth of the sun, the chill of the wind, the texture of grass, rock, sand), … Most of all it can involve the mind, the faculty of cognition.

p. 160, from “The Land Aesthetic,” chapter 7 of Callicott’s Companion to A Sand County Almanac

Carlson and Callicott agree on this last point: aesthetic appreciation and understanding go hand in hand. Appreciation deepens with knowledge. This is as true for natural beauty as it is for the beauty of fine arts. The more you can interpret the world around you, the better equipped you are to see its hidden beauty.

The first time I knew this for myself happened on a camping trip in Vermont. I had known, from a biology textbook back in high school, that some plant exists — Indian pipe — which does not make its own food. It does not photosynthesize. Instead, it parasitically lives off mycorrhizae, symbiotic associations between underground fungi and tree roots. Fungi and trees sometimes share nutrients, and the Indian pipe steals from this exchange. Without rich soil containing mycorrhizae, Indian pipes can’t grow.

After seeing it in the textbook, I always wanted to see it in real life, but never did. I assumed that I would just never get to see something so special. But a few years ago, as Jourdan and I set out on a hike, she said, “Hey, isn’t that Indian pipe?” Lo and behold…

And once we saw one, they seemed to be everywhere. The surrounding trees weren’t mere trees, but woods, healthy, old, and deep, so unlike most of the forests at home. We were visitors to an entire community, with some members towering over us, some sulking among the leaves, and some silent and invisible in the soil. Every time I see an Indian pipe, I’m thrilled all over again.

My encounters with Indian pipe have also lead to a deepening appreciation of fungi, without whom the Indian pipe could not exist. Over the past few years, I’ve had more and more fun pointing out the mushrooms we see on our hikes, like turkey tails — Trametes versicolor, a delightful thing to say out loud. (It’s also the star of the header image above.) There are the monsters, too, like the Berkeley polypore whose picture I took last August, long before I knew its name. Only a few weeks ago, as we left the house to run an errand, I asked Jourdan to take a detour so I could show her the puffball growing on someone’s lawn.

What is so special about mushrooms? Or Indian pipe? They aren’t exactly what you would call classic beauties. They are just so strange. Parasitic plants and saprophytic fungi belong to the world of goblincore, not gardens. They are, after all, things that can do just fine in darkness, thank you very much.

But also unlike garden-variety plants, they resist cultivation. Go to the produce section of your local grocery store, and you will find button mushrooms, portobellos, “baby bella” — these are all Agaricus bisporus. Today I noticed some oyster mushrooms for sale as well, but that was all. Compared to all the plant cultivars for sale, members of the Fungi kingdom seem to be in short supply. Look up the process for growing your own chicken of the woods mushrooms at home, and you can see why it’s so hard to make some fungi into your pet. Unless you have a method for autoclaving entire logs at home, you won’t get far. (Some fungi, though edible, have little culinary value beyond being fun to find and eat, like witches’ butter.)

Indian pipes and fungi are anti-domestic. They grow outside, on their own terms, often out of the public eye. They have a tendency to appear by surprise. Is it autumn? That’s the season for honey mushrooms and Grifola frondosa, but they’ll pop up when they’re good and ready, when the Puhpowee mood strikes. Good luck putting that on a timetable.

And yet, despite their frequent invisibility, they are intelligible. Callicott cites Aldo Leopold’s funny appropriation of Kant’s phenomena/noumena distinction to illustrate the significance of this point. Like the Dude’s rug in The Big Lebowski, there are some beings that really tie the room together in an ecosystem. They make the whole community live and breathe, even when they account for a tiny fraction of its biomass, even, indeed, when we don’t see them or hear them. The noumenon of an ecosystem can be unseen and known only intellectually, but it’s the intellectual knowing of the hidden essence that can turn a mere stand of trees into a forest. A passing hiker that tells you about a beaver dam nearby can change everything, and seeing the dam yourself can make an even greater impact. But you can get the same effect from grasping the fact that, beneath your feet, the trees around you are knit together in a gift economy by threads of fungus.

Each mushroom stands as a monument to this fact, the bottomless capacity for nature to outpace expectations and surprise us, even from the stillness of the soil. There’s a lot of fungi in my phone’s photo album, but none of them really fit in the frame, so to speak. Each one in itself shows why the landscape model of natural aesthetics falls short. Seeing a record from a vantage point is not the same as being there, and being there is only the beginning.